HydroFLOW® is a modular and scalable system. It is used on many different applications and systems. You will find these systems used in all sectors of industry, commercial buildings and the residential home. Pretty much anywhere where water is, HydroFLOW® is too.

Patented in 1992, HYDROPATH and our Partners have 30 Years’ experience with HydroFLOW®.

We have hundreds of documented commercial case studies, testimonials and success stories from around the world. We want to give you a flavour of these sectors and systems.

Let customers speak for us

My wife whom is a ocd/perfectionist -( very skeptical type)- does indeed see a difference and is really happy with the water situ here .
No more calcium/hard water stains on our clear glassed tea kettle- she also claims that her eczema / dry skin conditions have all cleared up on her arms .
Laundry seems to smell better especially with those soap sheets that was in our order -
Once again, all in all — a happy wife and and a happy life for me !
👍👍👍👍👍
Thanx again
Paul Ragany - 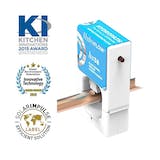 T
HydroFLOW S38 Water Softener/Conditioner for Small Homes on Well Water Telbisz (AKA biobob)
It took almost 6 decades for me to realize that soft water works better for cleaning!

From grade 4 onwards, I have been doing dishes - only using a dishwasher when I did some fun stints at a restaurant. Until I was 18, perhaps even longer, I used the original Lola Brushes which my mother imported from either Germany, or Holland, depending on the shipment. Kind of ironic, since she also imported the original formulation of biobob sponges (then called SOAKER) from Europe as well, but then she bought the formulation from the inventor in 1963 and bought this building then as well. All this time, because our well did not stink and because we never liked the idea of adding any kind of salt to our water - I have managed to wash dishes, completely clean by developing the old "time and motion" study methods. For the last week or so - it took me a bit to properly install the unit - not only has it become much easier to do dishes, everything is easier. May the inventor of this product rest in a well deserved peace and with the assurance that his biodiversity positive product(s) have found an ally!

It works as described